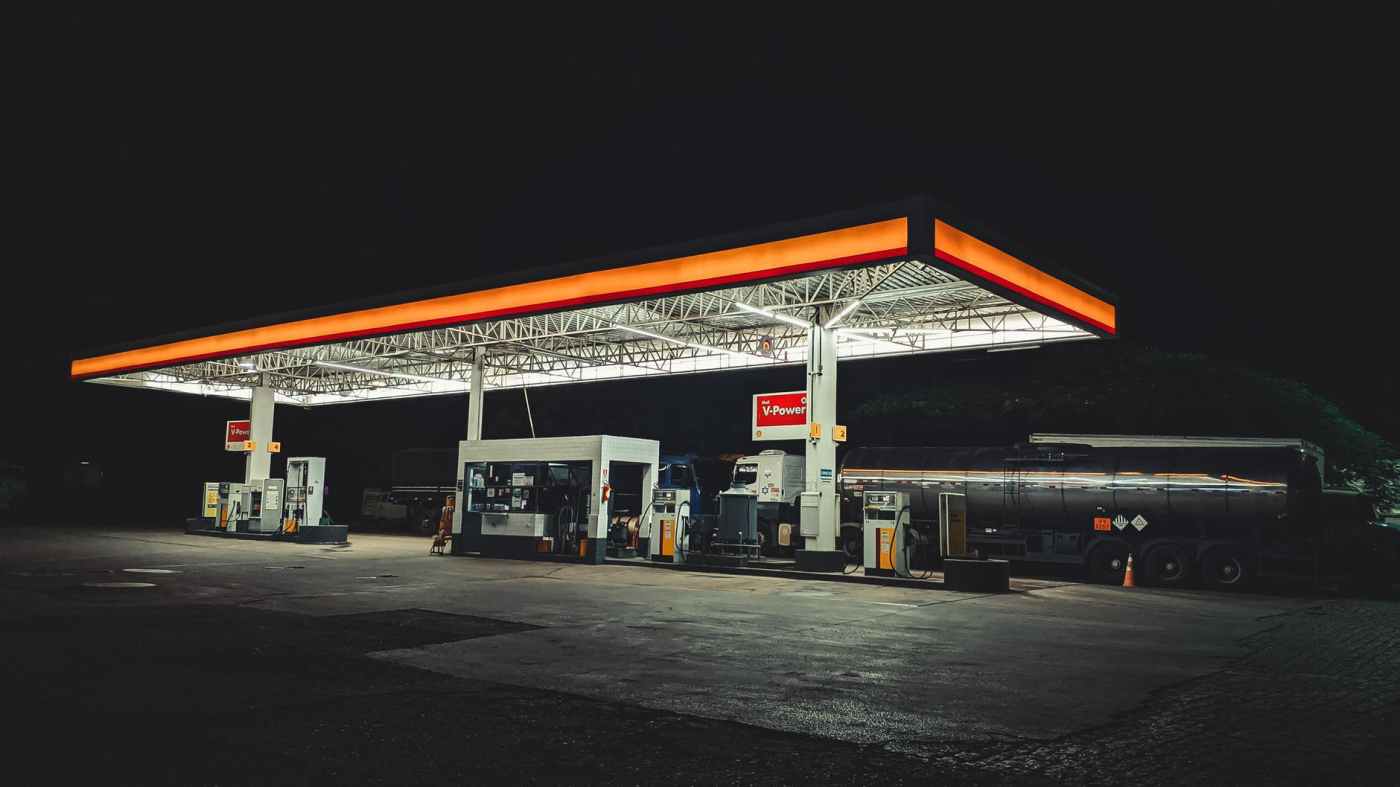 Growing up in a small town meant a lot of regulars. Places, routines, people. The gas station convenience store was a small microcosm of that greater regular.

6 am, Bill Donner stopped in on his way to the slaughterhouse for cigarettes and a package of powdered donuts.

7:15, the bus stop kids huddled around the magazine rack looking for the latest swimsuit edition.

I was used to all of them, knew their names, their families, where they lived and worked. They made the mornings simple. Regular.

The evening shift was a bit less predictable, seeing more folks who were just passing through, with the exception of Earl. If there was one man routine was made for, it was him.

Earl was a tall fella, easily over six feet, and he had the leathery, tanned skin of a laborer that contrasted with his straw colored hair and pale eyes. Despite his size, people took to calling him Mouse sometimes on account of how quiet he was. Except for the occasional grunt, he didn’t speak, never had, and he had a way of sneaking up on you so you didn’t know he was there ’til he tapped your shoulder. Anyone new to town said they found him off. Creepy, even, what with his habit of staring with that crooked smile of his.

Truth was, a head injury as a baby had just left him slow was all.

If you gave him time, he could write out simple words and he used gestures well enough to get his point across. He worked odd handyman jobs around town and lived alone out by the swamp in the house his parents left him, but otherwise I didn’t know a whole lot about him.

Except for how much he loved our pre-wrapped sandwiches with a cold Coke and a Hershey bar. Came in for them every night at 5:50 on the nose. Would nod toward the cashier on his way in, walk to the shelves for his items, then lay them down with a reverent kind of care at the register.

I saw him at least three times a week depending on scheduling.

He’d bob his head once, maintaining a steady eye contact while he did. Even with the smile, or maybe because of it, it could be a bit unnerving, the way he’d keep you in his gaze like that. You never quite knew what he was thinking.

I’d give him his total, always the same, and he’d painstakingly count out his dollars and coins, pushing them one by one across the counter to me with the tip of his pointer finger. He never wanted a bag, preferring to carry his things against his chest out to his old pick up. The thing was held together by paint chips and rust, but as he climbed in, he’d pat the roof affectionately, like he was thanking it for still running.

Same thing every day, pretty much down to the minute.

Momentary discomfort aside, I didn’t think Earl was dangerous or anything. Just a bit different.

Then one evening he missed his usual visit. I only noticed when it came time to clock out at 8 that I hadn’t seen him, and even then it was only a passing thought that hardly lasted a minute. I was too busy looking forward to getting home and settling in to a nice hot bath.

Made it about halfway down the quiet country lane toward my house when I noticed the beat up truck sitting at the side of the road in the dusk’s fading light.

My headlights fell on Earl, leaning against its tailgate, his face all wrinkled up with worry, and there was something so childlike in that expression that I had to pull off behind him.

For the first time, he shook his head and pointed helplessly to his truck.

I squeezed my steering wheel and sighed. I wasn’t in the habit of giving near strangers rides, but I couldn’t just leave him there when it was clear he was in such distress, especially not when I knew the town’s only tow truck was out of commission while Dave was on vacation.

“You live out on Cedarwood, right?” I asked.

He perked up and nodded.

“Well, it’s a little out of my way, but I can give you a lift home if you want.”

He was already coming toward me before I’d even finished making the offer.

The car seemed to shrink with Earl inside it. Even folded up like he was, he took up a lot of space. I leaned away, toward my door, and was only slightly aware that I was going faster than usual once we got on the road again. My passenger stared straight ahead, hands on his knees, quiet. I thought about trying to fill the silence with small talk, but decided against it in favor of the radio. Not like Earl could’ve answered anyway.

The turn off to his place was hidden between trees hung with thick Spanish moss. Crickets and frogs sang from the swamp behind his house, a two story that had started to sag with age. Old car parts, tools, and debris littered his overgrown yard.

It was exactly the kind of place I’d imagined for him.

“Alright, Earl, here you go. You got a phone so you can call around abou–” I stopped short, embarrassed. Of course he couldn’t make phone calls.

He stared at me and smiled.

“I could, uh…make a call for you, I guess,” I offered, although I wasn’t exactly thrilled to do so. “You want me to call the sheriff and let him know about your truck?”

I sucked in air through my teeth and gave a subtle look around. He really did live out in the middle of nowhere, didn’t he?

He tapped my forearm with a fingertip and inclined his head toward the dark house.

“Yeah, ok,” I finally said, and climbed out of the car with him.

As we climbed the rickety porch steps, he held out an arm and pointed toward some holes eaten through the wood. When he was satisfied I wouldn’t step in any, he crossed to the front door and held it open for me.

I barely crossed the threshold before the smell hit me.

Heavy, sick in its sweetness, stuck to everything. My daddy had been an avid hunter when I was a little kid. The smell of death isn’t one you forget, and Earl’s house reeked of it.

My stomach flipped inside out, suddenly screaming at me that something was very wrong here.

I threw my arm over my nose and turned to find the doorway blocked by his large frame. He was still smiling and waved for me to go further into his stinking house. With my nearest exit blocked, I shuffled reluctantly forward.

The floorboards groaned with each step. Earl flicked on a light, dim, but enough to chase back the worst of the dark. I was trying hard to only breathe through my mouth, although the stench was bad enough to coat my tongue, and I was all too aware of how close Earl was. There was nothing mouse-like about him in that moment. The narrow hallway in front of us, half taken up by the staircase, branched off into three rooms. Earl gestured toward the nearest one and then put his hand against his ear like a phone.

He stayed on my heels as I walked toward it.

The smell was getting worse.

The light came on.

An old phone sat on a side table next to a lumpy couch, its browned floral fabric covered in stains.

And lying upon it, her flesh shrunken and mottled, her dark hair matted into clumps, was the decaying remains of a young woman.

My scream startled Earl, who stepped back, and I took advantage of his surprise. I darted past him, shrieking, and ran for the front door. His footsteps seemed to shake the whole house as he chased after me, making a guttural grunting sound as he did. I threw the door closed as hard as I could as I went through, but he stopped it from closing with a meaty, outstretched hand.

I made it into my car only seconds before he reached it and frantically slapped the lock into place.

Earl crouched, his heavy forehead pulled into a frown, tapped his fingers hard against the window.

I jammed my keys into the ignition, set it in reverse, and pressed hard on the gas, sending my car shooting backwards. Earl made a brief attempt to follow, banging once more on my hood, but I kept going until I was all the way out on the road, where I spun towards town.

The drive to the police station was the longest I’d ever made.

A search of Earl’s house turned up three more women inside. They had died anywhere from weeks to months before based on their various states of decomposition. He was immediately brought in for questioning.

But, the sheriff told me, Earl was crying too hard to answer any. I thought it was guilt at being caught, maybe fear over what was going to happen next. The sheriff, however, said he was more like a child who didn’t understand what was going on.

They put him in a cell, where he eventually cried himself to sleep.

The next day, Dr. Mangin, who’d been everyone’s physician for the last three decades, was brought in. They thought having someone Earl was comfortable with would help with the interrogation. It lasted for hours, after which I was told what he’d said.

They asked if he killed the girls. He shook his head.

They asked how they’d come to be in his house then. He’d written out that he found them, already “asleep”.

Where? In the swamp.

With the same painstaking care Earl used to count his money, he’d written, I heard them.

When pressed for what he meant, he dragged his fingers like tears down his cheeks. Crying.

And then he was asked why he brought them into his house.

They wanted to go home. I took them. I helped. They stopped crying and have good sleeps. I helped.

“Do you believe him?” I asked the sheriff after he’d finished updating me.

He was quiet for a moment, and then said, “I think I do.”

“So what happens now?”

“A full investigation, maybe a trial. Earl will stay in jail while we figure it out.”

“Good,” I muttered, and to my surprise, the sheriff shook his head. “How is it not? You’ve got him.”

“I have a man in my custody who thinks he helped already dead women have ‘good sleeps’. Maybe I’m wrong, but I don’t think he had anything to do with their deaths. My gut says he didn’t. You know what that means?”

“That the person who did kill them is still on the loose. And now, there’s no one out there to hear their cries.”