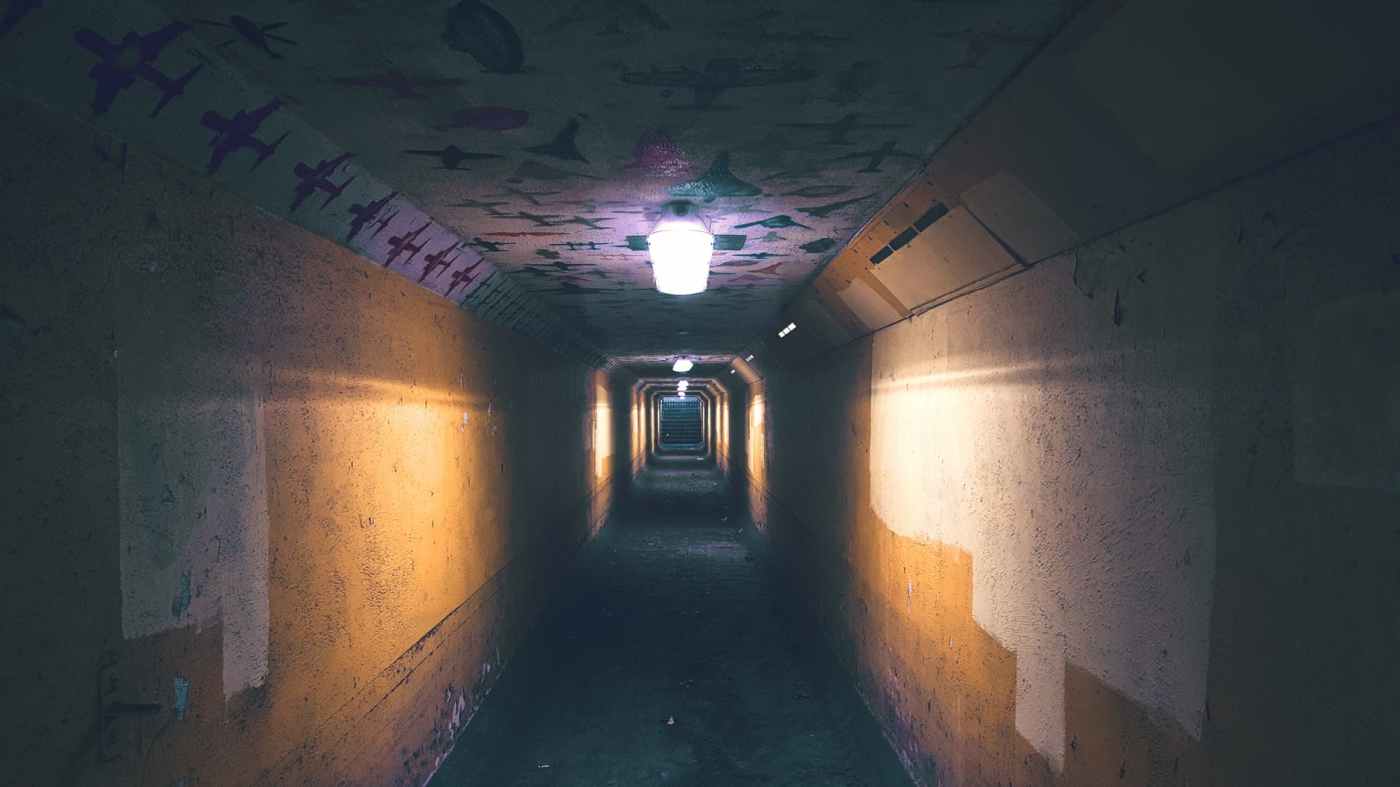 Mrs. Grady was the first to go. Then Mr. O’Toole and Mrs. Shafford. One after another, starting just after my night shift began at 10. I only knew because Bill, one of the nurses, came in with an abundance of bedding and towels. Being in the laundry room, I was usually one of the last to know when one of our residents died.

“Really?” I said as Bill passed off the laundry cart to me. “All three?”

He shrugged. Bill wasn’t the type to get emotionally attached. “It happens. Usually around the holidays, but when the colder seasons start setting in, too. Guess it’s better to be dead than to deal with winter.”

“Have their families been called?”

“You’ve been here how long and you don’t know how this goes, Gus?” Bill quirked a brow.

“The bodies need to go to the morgue before we call the families. Keeps the other residents from having to stare at them and contemplate their own mortality. Y’know, if they’re even still able to form any kind of real thoughts.”

His flippancy towards the recently departed would have been somewhat alarming if I weren’t used to it already. When I’d first met him, I had thought he was being cold. Now, though, I recognized it as a practiced indifference. A protection against the inevitable loss that accompanied working in an old folks’ home.

It was times like that that I was glad I was only the laundry boy. I knew names and room numbers and little else about the goings on upstairs.

“Good. Bring it up, would ya? Gotta get the tables made up before breakfast and we’re short handed as is.”

Bill left after a little small talk and I separated the towels and sheets he’d brought down. I tossed them into a couple washers and rolled out the cart with the table linens to bring it upstairs.

Being one of the “seen and not heard” members of staff, I rarely took the most direct routes to wherever I needed to go. Mason House Retirement Facility had gone through a lot of incarnations since it first opened its doors, but its start had been as a private hospital for the wealthy. Because of that, it had a lot of servants’ corridors tucked away behind discreet doors, which we now called the service hallways.

Same thing, really. They were reserved for the lowest paid and least respected.

My laundry cart squeaked noisily as I pushed it along. The sound echoed hollowly in the silence around me. The lighting was dim, casting long shadows along the whitewashed bricks. I hated those hallways, especially since I was often the only one in them.

The service elevator offered a momentary reprieve from the creepy atmosphere, being bright and loud. When it opened again, though, it was to yet another long, poorly lit, quiet hall. I could see the light shining under the double doors at the far end and started quickly for it. It was silly, I knew. I was a grown man in my twenties, spooked by being alone in an old building.

Realizing that it was silly, though, didn’t help the feeling go away.

I was so focused on that thin strip of fluorescent light signaling my escape back into normal retirement home setting that I didn’t notice the beds lined up against the wall just inside the doors.

Not until I was passing them.

“Nurse?” A frail voice whispered from one. “Water, please.”

It was hard to make out who was lying there. A man, I thought. Just one of the residents. Sometimes the orderlies stashed them in the service halls while they cleaned their rooms. I didn’t think it was the most ethical way of going about things, but I kept my mouth shut. I couldn’t risk losing my job over something that didn’t seem to be hurting anyone.

The man didn’t respond and I shouldered my way through the double door. It swung shut behind me. There was a nurses’ station on my way to the dining hall and I paused as I passed. Marta was seated at the computer, squinting over the top of her glasses and pecking away at the keyboard.

“There’s a guy back in the service hallway asking for some water. Do you think you could get some for him?”

She glanced up from her typing. “Hmm? A guy?”

“Yeah, I couldn’t tell who, it’s pretty dark back there. His room’s probably being cleaned or something.”

“You mean the one outside the rec room?”

“Nobody’s supposed to be in there,” she grumbled, getting to her feet. “I told them that’s where I was keeping…are those the tablecloths? Good. Go set those up. I’ll check the hallway.”

I nodded and continued on my way to the dining hall.

I’d only finished covering half the tables when Marta came to find me.

“Are you trying to be a little shit?” She asked thinly.

“Huh?” Was my intelligent reply.

“I went to check on the resident you said was asking for water. Nobody was there except the three I put there.”

“Maybe it was one of them?”

She arched her brow with a frown. “You think one of the dead people is asking for a drink?”

“Yes, dead. That’s where I’m keeping them until the morgue can pick them up.”

“I’ve been here a long time, Gus, and I’ve seen every kind of stupid prank you young people try to play. I’m only going to warn you once: don’t try me. I don’t have the patience for that nonsense.”

She just held up her index finger and shook her head. I let my mouth snap shut and she turned on her sensible heel and walked out.

I finished making up the tables in a confused fog. I was certain I’d heard a man’s voice asking me for water. Hadn’t I? He’d even confirmed it? Either Marta was yanking my chain, or I was going batty.

I felt her unhappy gaze on me as I passed by again on my way back to the service hall. I didn’t meet her eyes.

The hallway seemed even darker when I was standing in its doorway again. I hesitated, my hands twisting nervously around the handle of my cart. Now that I was actually looking, I could see that there were three beds all lined up in a row off to one side. I thought I’d been able to see a man’s face through the shadows before, but now I realized all three were covered with a white sheet. It was only the outlines of the beds’ occupants that were visible.

With a shaky inhale, I ducked my head down to avoid looking at them and started forward. As I went by the first bed, a thin, soft voice called out from beneath the sheet.

“May I have another blanket, nurse? I’m so cold.”

My breath hitched in my chest and I picked up the pace.

But a second voice came from the next bed in line as walked beside it.

And then a third voice, the same as of heard when I’d come off the elevator.

They echoed off the walls, surrounding me, repeating their requests over and over.

I abandoned my cart with a shout and dashed back through the double doors, into the welcome light. Marta poked her head out from over the nurses’ station counter.

“Don’t you hear them?” I asked pleadingly, pointing to the hallway.

“The three of them! In there!”

She sighed. “The dead people?”

“I don’t know what you’re playing at…”

“Gus misbehaving?” I jumped at the sound of Bill’s voice over my shoulder.

He was standing behind me with a tray of small, empty plastic cups, the kind they handed out medicine in.

“He’s acting strange,” Marta said with clear disapproval. “Are you on something, Gus?”

It took some persuading, but she finally came around corner and joined us in front of the service hallway. Bill smirked, bemused, and Marta crossed her arms over her chest and tapped her foot impatiently.

Little by little, I eased one of the doors open and waited.

The hallway was silent.

“I don’t have time for this,” she huffed.

At the sound of his voice, a low groan filled the service hallway.

Marta and Bill froze, their expressions sinking into shock.

“Nurse!” The second voice called. It had taken on a sharper edge. “Glasses! Where are my glasses?”

“Blanket!” The third cried. There was a menacing undertone to the word. “All I asked for was a blanket.”

“Water! Water!” The first hissed. “Water is what I asked for! What did you bring me?”

“You, nurse!” It was the second voice again. “Come closer so I can see your face one more time!”

“What the fuck are you doing?” Bill demanded, his voice trembling.

The tray of empty cups slipped from his hands and clattered against the floor.

“I’m not doing anythi-” I started to say.

But Bill had me by the back of the shirt and threw me against the wall. The air flew from my lungs and I gasped breathlessly.

“Do you think this is funny?” His face filled my vision and I could only shake my head.

From the still open hallway door, the third voice cackled.

“Don’t ask him for anything! We learned that!”

“We all learned that,” the first voice crowed in agreement. “But we were not the first.”

“We learned,” the second said, and then the the other two joined in, until their voices raised in a vicious, crackling whirlwind that poured from the service hallway,

Bill’s mask of fury melted into a frightened one and he reeled back, away from me. He stared at the doorway for a moment, his mouth gaping, open and closed, open and closed.

“They’re lying!” He yelled at no one in particular.

Marta was shrieking and running back towards the nurses’ station.

There was the rustling of sheets from inside the service hall, and then a long, slow creak, like someone was starting to climb out of one of the beds.

Bill started to back away, one arm held out in front of himself defensively.

The voices continued to grow, deepening into growls.

The doors started to swing open. I slumped to the floor and huddled in as small a ball as I could manage against the wall, my eyes squeezed shut.

The voices filled my head.

There was a thud. Bill’s desperate shouts. The sound of dragging, of nails biting into the floorboards, of desperate, futile struggling.

The doors slammed shut again, and all went quiet.

And when I could finally force myself to open my eyes, Bill was nowhere to be seen.