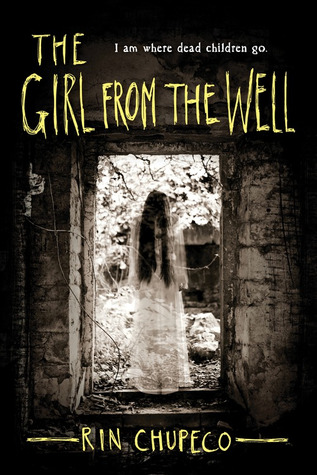 The Girl from the Well is the tale of a vengeful ghost who becomes acquainted with a tattooed boy harboring a dark spirit. As they grow closer, and she learns more about his life, family, and the creature dwelling within him, she becomes determined to help save him, no matter the cost.

I loved the idea behind this book and the initial set up. Chupeco is a talented author, balancing a YA story with truly chilling scenes of Okiku exacting her special brand of vigilante justice against child murderers. Okiku herself is an excellent character, caught between the sweet maiden she was in life and the monstrous being death has made her. She’s sympathetic, but unapologetic as she fulfills what has become her duty, which I found refreshing, especially for a female YA protagonist. There’s no guilt or second guessing: She knows who and what she is and doesn’t change even when she realizes she can be seen. The parts of the story that focus on her separate from Tark and Callie were my favorite, and I really wish we’d seen more of Okiku truly being herself instead of following the living around.

While I liked the premise behind the story, I was not very fond of most of the other characters and felt it moved rather slowly when it came to what was going on with Tark. His character came across as little more than a vessel (pun intended) to keep the story going. He was bland and lacked any real depth. When he wasn’t being pretentious, he was just boring. His cousin, Callie, was a little more fleshed out, but not enough to keep her from being a rather one dimensional maternal figure. That was an issue I had with almost every character other than Okiku, actually; they just felt very cardboard.

The plot itself is something of a slowburn, going back and forth between Tark’s situation and Okiku’s (vastly more interesting) time alone. I would have loved to explore the woman in black more, other trapped spirits, her freeing more children. What we got, however, was her doing a lot of observing while Tark angsted and Callie worried over him. It felt like a lot of time was spent to say not much at all, which was disappointing as I very much enjoyed Chupeco’s writing style, including the quirky formatting and repetitive nature of the ghosts’ thoughts. The idea was there, but it felt underdeveloped, with too much focus spent on Callie, and not enough on Okiku.

While this book wasn’t exactly for me, I would still recommend it to readers 13 and up interested in Japanese lore who enjoy supernatural tales.