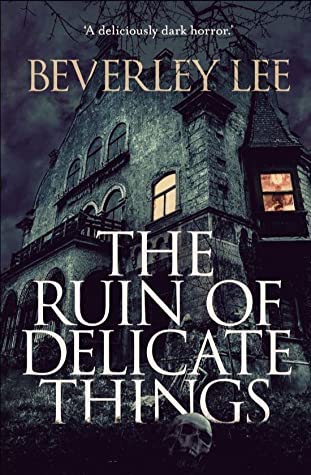 The Ruin of Delicate Things is woven around loss, repression, and pain to a dark fantasy backdrop. After their young son’s untimely death, Dan decides to take his wife, Faye, to his childhood home in the countryside. Despite the place stirring bad feelings in him, the reasons for which aren’t remembered, he thinks it might be a good spot to heal their crumbling marriage. Faye, so caught up in her grief, further isolates herself behind her headphones and artwork. When they come across Barrington Hall, however, things begin to take a darker turn and Dan realizes there’s a reason he’s forgotten so much of his time there.

There is no question that Beverley Lee is an extremely talented author. Her characters feel real, their emotions raw. They’re not always likeable and sometimes you want to shake them, telling them to just talk to one another, but hurt has a way of twisting people into shells of themselves who need time to reform around the pain. Lee captures it with heartbreaking accuracy. The atmosphere of Barrington Hall is almost a character in and of itself. It looms all around, waiting to pounce and consume any who cross its threshold. The scenes that take place within the hall are my favorite by far. I really enjoyed how well she intertwined the dark fantasy aspects of the novel with the horror, which in and of itself was both supernatural and very human.

While there is a LOT to love about this book, I did have issues with the pacing. The beginning especially felt very slow and I had difficulty getting through it. There is also a lot of repetition in those early chapters, revisiting the same themes over and over again. At times it felt rather heavy handed and I just wanted to skip ahead.

Overall, I did enjoy The Ruin of Delicate Things and am glad I stuck with it. I would recommend it for those who enjoy British, slow burn horror with incredibly spooky atmospheres and realistic characters.