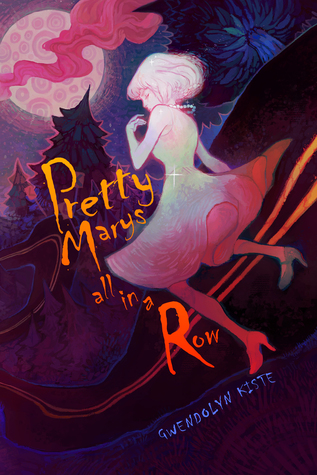 Pretty Marys All in a Row by Gwendolyn Kiste is a short, fun read that follows Resurrection Mary, Rhee to her friends, and her sister Marys, all supernatural beings based on folklore and poems that inhabit a house in an ethereal afterlife. They spend their nights haunting the world of the living before returning to their home to feed on the fear they’ve gathered. When things start to go awry and the Marys existence is threatened, Rhee sets out to discover what is waiting to ensnare them from the darkness.

Kiste has such a way with words from the first page. She draws you in with fantastic imagery and holds tight through to the end. Readers are invited into the shadowy corridors of the Marys’ residence and to walk alongside Rhee as she haunts the same stretch of road every night. The setting is phenomenal throughout and I really wish we’d been allowed to explore it in more depth.

I really liked the character of Rhee. She was headstrong and resilient, but also vulnerable. The other Marys were more of an enigma, ones I’d have liked to learn more about. Compared to Rhee, they seemed fairly one dimensional to fit a certain dynamic into the house: the matronly Mistress Mary, the fiery Mari Lwyd with her horse skull, the sullen Mary Mack always building her coffin, and Bloody Mary confined to her mirror taking on the role of confidant for Rhee. I found it hard to care for the fates of anyone outside Rhee and perhaps Bloody Mary as there wasn’t a whole lot there to chew on. Even the lurking evil, known as the darkness, was difficult to connect with as an antagonist based on how little we’re told about him.

And I think this was one of my major personal issues with the book: I felt like it needed to be longer. I was really excited to read it based on the premise and gripped immediately, but there was little in the way of really building the world of the Marys, how they came to be, what the darkness was. It felt a bit like we were sprinting through the plot, spurred on by characters failing to communicate for seemingly no reason and Rhee mastering abilities in a single page without any explanation as to how she learned them. While I did enjoy the final reveal of who and what Rhee and her sisters were, the climax passed quickly and I was left feeling like I’d only really read half the story.

There was so much potential here, rooted in a great idea about urban legends and written with such skill. I did enjoy the book and would recommend it to others who enjoy unique takes on supernatural horror, but wish the tantalizing bones had had a bit more meat to them.