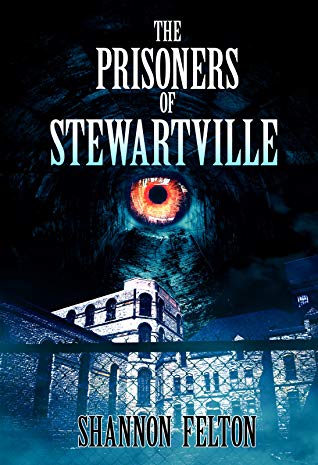 Shannon Felton’s The Prisoners of Stewartville is a glimpse into a depressing town overshadowed by the prison complex sitting in the middle of it. The horrors found in the tired, littered streets are subtle and creeping, and only sometimes coming from where you expect.

I really enjoyed this book. The story itself was engaging, the pacing was done well, and the characters were believable. It was half a look at the effects of a forgotten city where poverty and drug use are the norm and half a supernatural tale of what lies beneath. Both elements were woven together very well and played off of each other so that the reader and the main character, Casey, were never quite sure what was going on until the very end.

The sense of realness is really what made this such a good book for me. The teens trying to find their footing in a world that doesn’t seem to have a place for them, the ever-present sense that their destinies were written the moment they were born into Stewartville, the hopelessness and feelings of being trapped. It could be incredibly bleak, but the characters at the center of it, particularly Casey, Charlie, and Zeke, hadn’t yet been broken by it. They retained some measure of hope and goodness for much of the story.

I would definitely recommend this book to those who enjoy fast paced, character driven stories where the supernatural elements play second fiddle to the people involved. It kind of reminded me of The Outsiders in a way, but in Stewartville, staying gold isn’t nearly as easy.